According to the company,  "C4FM corresponding to the digital narrow,"  "further optimize the C4FM digital demodulation control under conditions reception is severe, such as weak electric field and multi-path", that a number of improvements have been achieved.

Shipped in 2015 the end of May to start a C4FM digital mode compatible handy machine · FT2D is, was a major update of recently's first firmware. Its contents are as follows.

(1) it has been done to optimize the backlight and the lighting timer setting.
It was made possible display the distance between the (2) C4FM partner station of digital and APRS communication up to 20,000km.
(3) receive, such as a weak electric field and multi-path condition was further optimize the C4FM digital demodulation control under severe conditions.
(4) we now support C4FM digital narrow.
(5) Other, we gave a functional improvement and optimization.

In addition, the update of firmware, use the USB cable that came with FT2D. Before connecting the radio to the computer, read the manual updates, it is necessary to install the software and drivers required for the personal computer.
When performing the update work that confirm the steps in the pre-manuals. Download from the following related links.

In the middle of winter, the air got hotter and hotter as the release date is approaching.
The estimate date for Europe is the end of January 2016 and I hope to have it on my table in the first week of February!

The shipping to Japan (well...) already started a few days ago. To USA is still on hold due to FCC approval but to Europe... Well, it will be here soon!


Here is the Product Brochure for the Icom IC-7300 in pdf format.
Note that on some browsers the site is reported as a malware site but is not true.

The file is on Google drive now.

Here is the User basic manual for the ICOM IC-7300.

ICOM Europe postponed the distribution to middle March 2016.
I understand that the European launch is synchronised with the USA market launch which is FCC dependant, so...


Here are the full specification list according to this Manual:

RK7K, another pirate station from disputed teritories occupied by the Russians 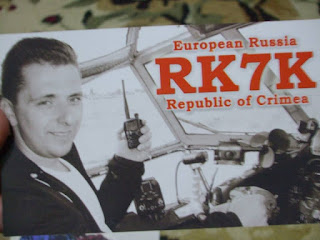 Well, I had a previous post about a pirate ham station from the "Republic of Donetsk".
It seems that the russians speculate the wish for HF of our comrade hams and forces (i hope is a forced "option") to use russian issued ham callsigns in order to practice their hobby.

Is sad, it's like taken the favorite toy from a helpless child but the reality is that RK7K is not a valid ham radio callsign.

Because, to be valid, the callsigns had to be issued to a national authority recognised by ITU. Or, the Crimea Peninsula/ Republic of Crimea is under the Ukraine's administration when we are speaking of radio spectrum and coordination! 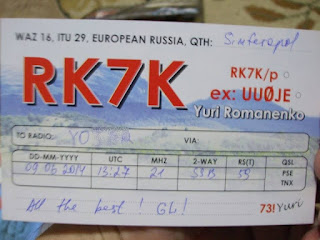 So, for me, as a Romanian Ham, RK7K is, sadly, just a pirate stations ahich I am not allowed to contact by radio means.

Nope, the QSL card is not mine, but a Romanian fellow ham who was fooled into this info war..


Here is a message from  Ukrainian Amateur Radio League: