I will try to post here faults from various sources and how the problems were mitigated.

4. Failure at Power On /  Intermittent Power On

" When I press the G90's power button it turns on, and then turns off right
after. All this started to happen after I turned off the equipment by the
power supply, instead of having turned off the G90 first through its power
button."

Here is the internal power supply and Power On/Power Off switching transistor.

The microphone is fed with 9V from the first LDO from the 13.4V.
The Front Panel is fed with 5V and 3V3 from an inside LDO.

It might be a good starting point to check te second LDO 7805 on the lower PCB inside the Main Unit.
You must feed the first LDO with 13.4V through a 500 Ohm from a lab power supply limitd to 200 mA and check the presence of 5V at the output of the LDO.

Before trying to find a solution for the problems, it's a good practice to try to understand where, how and why the fault is ocurring.

A short version of what is happening when you push Power:

The first noise you hear is from 9V being applied to the Audio amplifier.
After that, because the Front Panel has no 5V it cannot communicate with the Main Unit CPU which cannot keep POWER SWITCH ON.

Probably will be a good option to check if the silicone rubber is in the right place inside the Front Panel, I remember someone on Facebook had the same problem, solved with this. The single differente to that case is the microphone backlight in your case.

This problem is fairly common and affects the receiving front end of the radio.

The fault is located on the Small Signal Board (the PCB that is exposed when the upper panel of the Main Unit is removed) and the fault can be repaired without removing it from the radio as the PCB is one side populated with components.

First, the RF is coming from the antena through a Rx/Tx relay (PA RF Board) to that small connector. 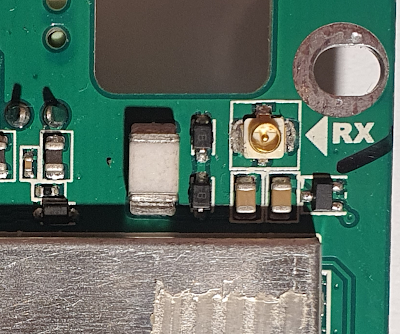 Let's explain what is near the RX connector. Here is the relevant part of the schematic: 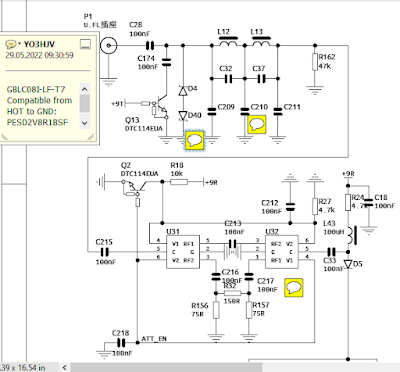 On the left there are the two ESD protection components, D4 and D40. These are not regular diodes but specific protection semiconductors.

The original components are GBLC08I-LF-T7 but might be very well replaced with PESD2V8R1BSF. In order the protection provided to be effective, the replacement components must be connected in anti-paralell mode across the D4-D40!

On the right side there is Q13 which role is to cut the RF that might came from the PA RF board.
At least D4, D40 and the Q13 must be removed to isolate the problem of No Rx!

If Rx is still not working, we must check the proper working of the Attenuator circuit, which is made with U31 and U32.

Those two circuits are similar to SPDT relays but they are semiconductors. In vast majority of cases I saw the issue, the problem is here also, at leat U31 is burned but U32 is still working.

U31 and U32 are located under the metallic shield.

The shield is not soldered and can be lifted with a sharp tweezer. Pay attention when you are removing it, be gently!

When you put it back, pay attention to the alignement of retaining clips on the PCB! 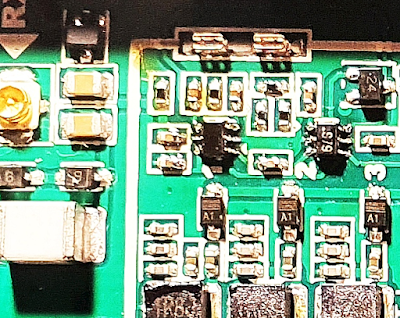 Here it is how: 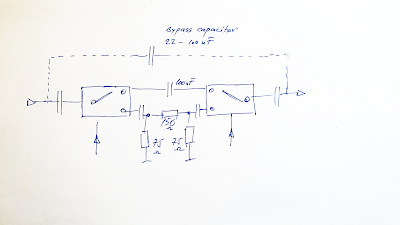 On an another burned radio (assisted repair via e-mail, HI): 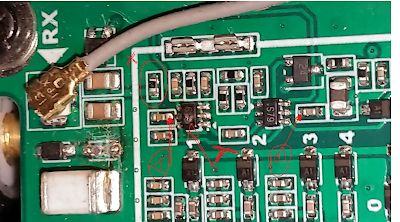 On EVERY radio I see affected by strong discharge on the Rx, this solved the problem and re-established the capacity of receiving. Of course, with this, the ATT will not work so proper replacement part must be provided to restore the radio to fully working state.

Here is a picture sent by one of fellow hams with this kind of problem... 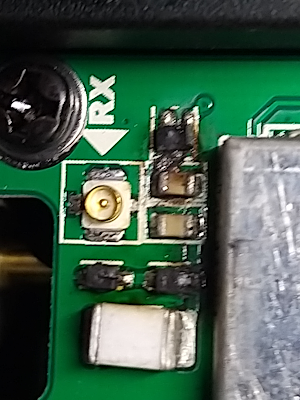 I finally got a bit of time this evening to sit down and repair my Xiegu G90 radio that developed a very strange fault. I posted about this a couple of weeks ago but here's a link to a video of the misbehaving radio anyway .
Before I start, I'll just mention that there are NO schematics or service data available for this radio as Xiegu seem to think that the world will collapse if they release any useful info like that. There is a very good block diagram (re-posted below for reference) produced by Adrian Florescu when he was looking at his own G90. His radio is a different revision than mine but the main blocks are the same.
The radio is an SDR design with incoming RF converted down to two I/Q signals that have a 90 degree phase difference. These are then digitised and processed by various DSP witchcraft and sorcery. On this radio, and many other SDR designs, the I/Q signals are available on a rear socket so they can be fed into a computer soundcard and processed with software like SDR Sharp or HDSDR etc. When tested, the I/Q signals were present and correct at the rear socket (see photo) which proved the front end of the radio was OK, as was the Quadrature Sampling Detector (QSD). This led me to suspect the CODEC chip that digitises these signals and pipes them to the radios main processor.
I checked for the I/Q signals at the input of the CODEC chip and they appeared to be OK there too.... Excellent. Just order up a replacement CODEC chip and that should be it.... Unfortunately, these turned out to be rare as unicorn poop, with none of the online suppliers having ANY in stock at all. There was one eBay seller that had two of them so I grabbed one for £20. It arrived a couple of days later and I fitted it to the radio and fired it back up..... The fault was still there! What?
So... This evening I sat down with a Guinness West Indies Porter or two and worked through things a bit more methodically than before.
I injected some RF into the radio and traced the I/Q signals from the QSD through to the CODEC chip. The signals were fine at the output of the QSD and also at the following buffer stage which is where they are tapped off for the rear socket. After this each of the two signals is fed to another op-amp stage. These op-amps take the I/Q signals and produce a differential output signal from each one. This is the bit I hadn't noticed before. These differential signals are fed to the CODEC chip. Looking at the outputs of the "I" channel's dual op-amp showed the signal to be present and correct on both outputs. Checking the "Q" channel showed only one output to be present. Thankfully, the two channels are identical so I was able to take a couple of measurements from the good channel and compare them to the faulty one.
Across the + and - inputs of each op-amp half were a resistor and capacitor. On the good channel, I could measure a resistance of 2.2k across the pair. On the dead channel - ZERO OHMS! So, it's either a dud chip or an issue with one of the two components. I removed the op-amp chip as gracefully as I could and measured across the resistor/capacitor pair again. Still zero ohms. So, the fault was either the almost invisible capacitor or the almost invisible resistor. On a hunch, I re-flowed the connections to the capacitor. Not an easy task due to its size. I don't mind working with surface mount stuff but these parts were almost invisible. Anyway, after a bit of swearing I re-checked with the meter and the short had gone. Fantastic!
I re-fitted the surface mount op-amp chip, partially re-assembled the radio and gingerly powered it up...... IT ONLY BLUMMIN WORKED !!!!! No more mirroring on the display and the tuning behaved as it should.
Is this a finished repair? No. The fault may have been a tiny solder bridge under the capacitor that was cleared by re-flowing. It may have been an issue with the part that was resolved by heating. Who knows.... To be certain, I'll replace the capacitor but that will mean trying to figure out its value. That will probably mean removing the same microscopic part from the other channel and measuring its value. I'll maybe get round to doing that at around quarter past never o'clock...... Meanwhile... RADIO.
1. From Facebook Xiegu G90 Users, Kyle Arrowood

I have a Xiegu G90 and the receive just started messing up the other day. I have done everything I can think of to remedy the problem with no luck. I have used an online sdr to listen to my signal and it was clear and clean, but when receiving the other stations sound like robots. I used the same antenna on my Yaesu FT-818 and it works perfectly. This happens on every Band on USB and LSB. Does anybody have any suggestions?
I bought it from Bridgecom and would rather not have to deal with them again.
Xiegu G90
Version
Base: 1.77
APP: 1.76
Antenna
G5rv
I have tried:
Factory Reset
Re flashing the firmware
Tried older firmware
A different antenna
Using the extension cable for the head
Changing the rf gain
Changing the filter settings
Checked Vox is off
Checked RIT was set to 0
Plugging in headphones to make sure it wasn't the speaker
Moving the vfo to make sure I wasn't off frequency
Toggled agc, NB, attenuation and pre amp,mode,band
Vfo A and B, compression
Made sure it was on Mic input
Tuned and checked SWR
Left it unplugged from everything for a day
Swapped coax
Even tried Battery power.
The problem was solved after checking the Reference Clock which was bumped by accident to -2 value!
Niciun comentariu: