I have been asked by a friend to make a custom IGBT controller. Well, I heard about this marvels previously but didn't bother to read about more than the general definition.

I will not reiterate here all the theory behind the Isolated Gate Bipolar Transistors; who want to learn, there are several pages on the internet. 1, 2, 3.

After reading a lot of datasheets I decided that the best approach is to make a PFM generator working on 40-80 kHz with fixed 50/50 duty cycle, modulated with a PWM signal at around 100 kHz.
One big issue was that the 50/50  signal have to had a precise timing to match the Half-Bridge command mode. This is hard to achieve with microcontrollers but very easy if you use a specialised IC. So I start to look after this kind of circuits and found a lot of them!

The IC controller at choice was the IR2153 made by International Rectifiers (later aquired by Infineon).

Here is the waveform needed by a Half Bridge IGBT to work properly:

I did the schematic on a small breadboard and found it work from the first power-on! So, time to move on, to the variable PWM.
The simplest way to generate it was from a Arduino board using the lowest interrupt timer at 122 Hz. I wanted to use the interrupt timer because it's steady, precise and it's not affected by other "things" the microcontroller does. And I planned to do some nice things with it!

To keep the story short, I generate the signal with the Arduino, put the informations on a I2C LCD display (a nice bargraph, temperature and status) and did a test check-out at the Power On. More on that, on the small Youtube video I made. It's in Romanian but you get the point!

Here is the schematics and the code.
Oh, a big thanks to Damien Clarke who wrote a very nice library for reading analog values!!!

The CODE is available HERE ON THE GITHUB. 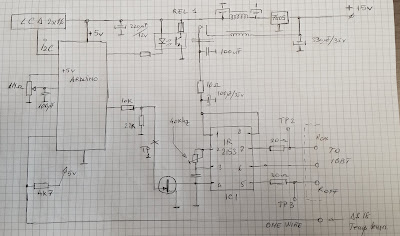