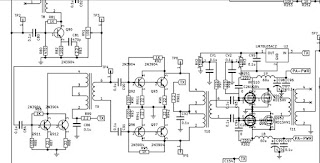 OK, it was the time to see how the TX section of the uBITX is... 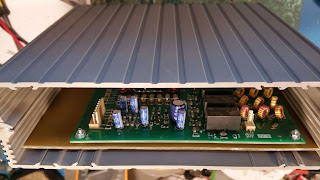 From time to time I also tested how it fits inside the case...
The radio PCB was fixed on a larger one-side plated PCB that slides into the aluminium case.

I also checked the front panel to see if the potentiometers and other stuff are OK with the main board... 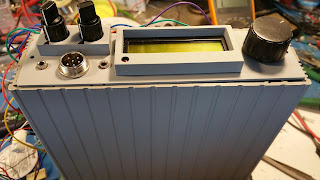 First of all, the Tx power was around 7-8 W PEP on 80 and 40 m bands, decreasing to around 2W on the higher frequencies.


First tought was to fiddle aronud with the IRF transistors... I was eager to try to change them with RD16HHF1...

The results was not able to convince me... The transistors ran hot, too hot and the Tx power was about the same.

So, I reverted back to IRF510, kept the new transformer. I kept the neutralisation network as described above and put a 27 pF between the Draines of Q94 and Q95. 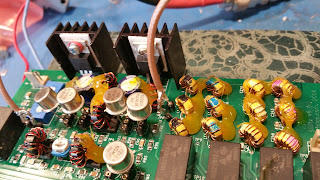 The Drain current was set at 150mA each.

I have a lot of BFW17 and BLW65 and by looking at the datasheets, I choose BFW17. 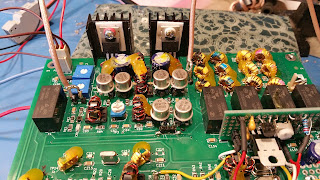 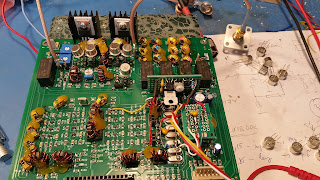 I masured the transistors to have identical hFE and I choose one with 120 for the Q90 and the rest of them was with hFE of 92.

I still had to put it on the Spectrum analyser and do the two tone test...

You can see two RG317 wires. Those are to put the final stage to test on the Spectrum analyser with tracking generator to see what is the effect of the mods I made on the PA. 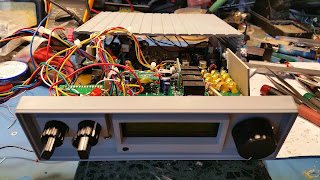 Again, testing if it fits inside... 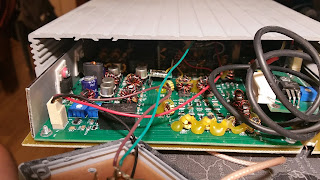 Here you can see the new output transformer and the PARF radiator. 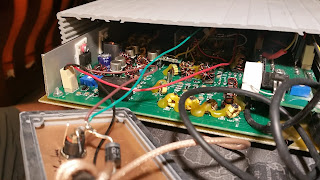 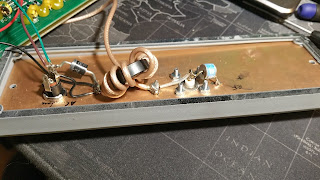 At the RF output, a 1:1 choke balun was made from the RG317 on a 43 mix toroid and a gas discharge protection was added.

New QRP-uBITX in the shack - II - A few necessary measures 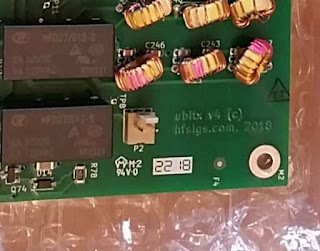 First of all, the board is "Rev 4" which means it came with discrete audio PA and "Audio pop mod".

Here is the full diagram of the uBITX main board.

We'll get back later to this diagram. 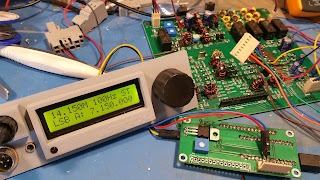 1. After unpacking, the parallel LCD was replaced with a I2C one as I want to free some hardware resources for further improvements.
I uploaded the new firmware, the one from KD8CEC.

A quick test for the Raduino board. Everything is OK. 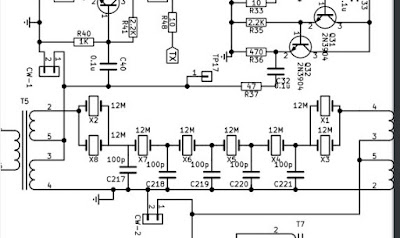 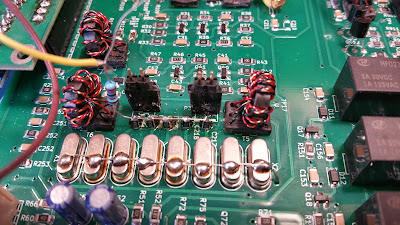 2. The crystal ladder filter must be grounded. A small 0.8mm hole was made and a ground wire soldered on all crystal's cases.
I used the occasion to implement the mod for the variable IF filter.
For that, I removed C217, C218, C219, C220 and C221 and replaced with 5 varactor diodes.
I found SVC236-TB-E to be suitable for this purpose as I need to have between 50-100 pF and a good stability over a large temperature range.

Here it is how it looks... You cannot see the varactor diodes here because of the 47k resistors but they are behind the line of resistors, right in the place of the removed capacitors. 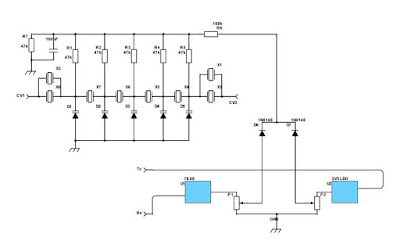 Here is the diagram for the mod. 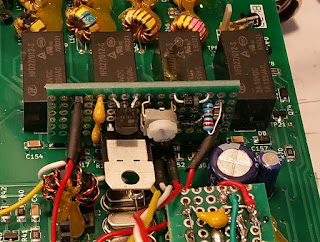 -The 12V which came from the Rx/Tx relay are regulated by the two linear regulators. As we increase the voltage, the IF bandwith widens. For Rx, 0 to 8V measured at the common cathodes of D6 and D7 correspond to a variable bandwith from approx 250 Hz to 4 kHz. For Tx, a voltage around 2.9V gave a nice warm modulation of about 2.8 kHz.

I have on the panel only P1. You can use any linear regulator or even some Zenner diodes with 4k7 resistors. 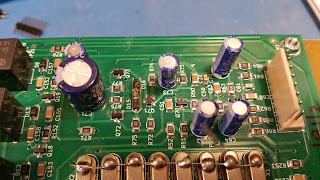 3. Some mods are necessary also on the audio PA stage.
There are some crossover distorsions that made the audio bad. To solve them, I modified the polarisation of the final transistors. Remember I told you we will revisit the schematics of the audio PA? Good! Between D15 and D16 a resistor must be inserted. I tested various values and the best results was with  10 Ohm. The trace between the two diodes was cut and the SMD resistor was placed right between.


Here it is how IF variable bandwith sound (CW):


I also use this TRX to listen to MW broadcast: