There are not many features missing from the Xiegu G90... At least, when is about hardware, in the firmware, there is another story.

When I was replacing the STM32F103 in the front panel, I was asking myself if I can add backlight to the front panel keypad. At that moment I was focused on that repair job and I put the ideea on other shelf.

These days I will get involved into a big project and I will have to let down this kind of PMR (Pimp My Radio)  projects so I thought this is the right time to gave it a chance.

I have around some SMD LEDs and some ideea so, I get to the bench and opened, once more, the front panel assembly. 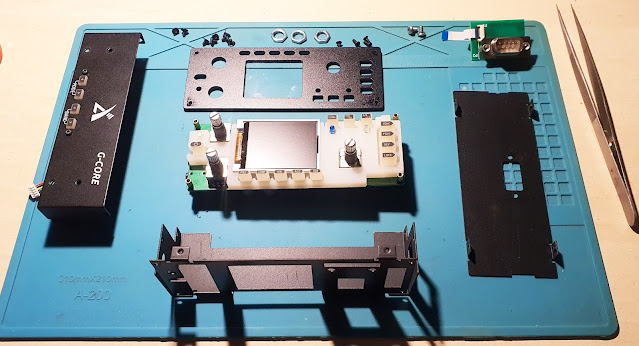 I did some tests about how the light is diffused in the rubber keypad and I investigated the places where I can put some LEDs.
The space between the PCB and the keypad is none so we need some alteration in the keypad rubber to accomodate the LEDs and the wires.

First try was with the tip of the soldering iron but, to my surprise, nothing had happened.

Then, I tried to use a 3.5mm drill to remove the rubber in an "organised" manner... nothing! The rubber act like rubber and get back into the hole.

The problem is that I must embedd not only LEDs but also the wires that goes to them. About the wiring, I had in plan to use 26 Gauge wrapping wire (around 0.5mm) so a proper way to make them too has to be found.

Here is the optimal position for a bunch of wide angle SMD LEDs to diffuse the light into the keypad.

NOTE 1: the botom line of keypad is already illuminated by the backlight from the LCD. Not very bright but enough to be seen into the dark.

NOTE 2: the colour of the LEDs has to be different than the two LEDs for Function and CW decoder because the light will be conducted in those too and will cause them to appear lit.

The bottom of my radio case already has an open slot where I can inject light into the bottom 4 buttons.
How about modifying the case on the right with the same type of slot.
Then get some 90 degree flat led's with some 3d printed surface enclosure to hold them and design your own PCB and battery holder - or just a 12V adapter/circuit.

I am not happy with this method. I try to keep it clean and simple without added structures.

Ron, this could be a solution! Fiber optic... Interesting!