There is a while since I made a nice electronic keyer; being made with Arduino, a simple solution to monitor the keying was to define a PWM pin and to push the signal into a small piezoelectric speaker.

The sound is horrible and many times I thought to make a small one transistor oscillator.

The goal became more acute as I plan to use ICW, an online CW audio "chat", a place where I can train my CW skills with a human correspondent without bothering others on the waves. Fort that, a sine audio generator is needed.

But... I am lazy. The one transistor sine generator is a mess because you need to make a buffer and an amplifier then some sort of audio filter with a bulky coil, you know... And I am lazy!

Being lazy have some advantages. One of them is some sort of visual memory to compensate. Instead of searching or making improved iterations, I lay back and try to visualise things...
I rememberd one time searching for some components and saw in a box a nice circuit, XR2206, a nice function generator. It was in the same box with a XR2211, a pretty nice FSK decoder. It's presence was vivid in my mind because some months ago I tried to make a CW decoder and the XR2211 was used as a PLL detector for the audio CW signal. But that never worked and I abandoned it for the cheaper LM567. But this is another story... 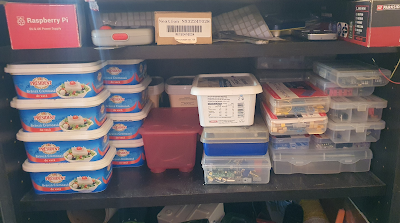 Now, the search moved into another boxes. The higher tier, those with failed or abandoned projects...

An pretty soon I found the PLL CW decoder with, you guess it, XR2206! Damn, that's why it never worked!!! Not only I am lazy, I am also stupid.

So, now I have the XR2206 on the bench, everything is it place, after 30 minutes, the generator was ready to be tested.

I used a schematic found on the web and I kept only the necessary components for sine wave as square and triangle was not needed. Of course it didn't worked and I had to go to the datasheet to make things like in that document. I kept the things simple.

Here is the schematic: 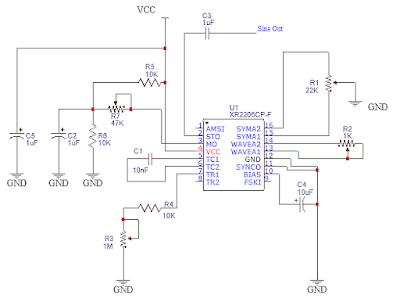 Because the schematic was simplified, the sinus is not a perfect one, just a "good enough" one.
The next step will be to find a way to switch ON/OFF the sine wave. 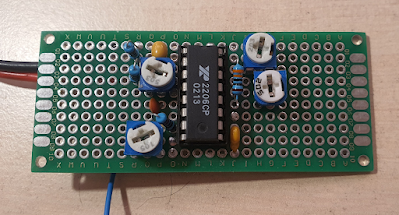 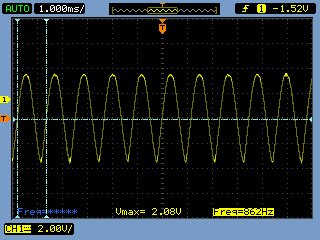 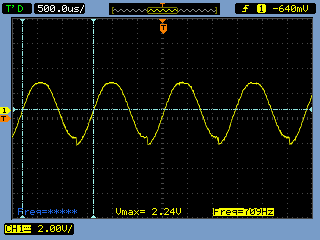